1102 the jargon of chemical equilibrium

OVERVIEW
​
In general about jargon

Communication is about transfer of meaning

In an educational context, communication is not just one way. Even in a rather didactic situation, when a teacher is transferring meaning by instruction, and questioning to check learning, every student response to a question is an attempt to transfer meaning to the teacher.

Communication failure is not just the result of one party’s lack of understanding of the other: there is also an issue of mis-understanding: that is, forming a meaning different from that of the speaker/writer.

One of the contributing factors to mis-understanding can be lack of, or different understanding, of the meaning of the language used. Language specific to a particular topic is what we call the jargon of that topic. Just as there is a jargon of football, and of criminal law (for example), so there is a jargon used in discussion of dynamic chemical equilibrium in chemistry.

If there is not a reasonable degree of commonality of what these terms mean, mis-communication is probable.

We will ignore here the important concepts of reaction quotient (Q) and equilibrium constant (K) because they are defined and discussed in some detail in another module (1103 Equilibrium constants: What do they mean?).

Let’s use the following chemical equation usually used to represent ionization of acetic acid (ethanoic acid) to illustrate some ideas:

We will see that for precise meaning of terms, it is important to distinguish between the reaction and its representation as a chemical equation. Try to get into the habit of visualizing the molecules and ions in the solution (reaction mixture), rather than the equation.
​Reversible reaction: If the species in the equation are present in a reaction mixture, then both of the changes

are happening simultaneously (at the same time). Each of these is the reverse of the other.
​
Reversible reactions are represented by the double arrow symbol

This symbol does not mean that the reaction is at equilibrium – it may be, or maybe not.

It is capable of achieving an equilibrium condition.
​​
Direction of reaction

In the case of a reversible reaction like the one represented above, it is common language to say that one of the reactions goes in the “reverse direction” (or “opposite direction”) to the other.

does not mean "moves to". Rather, it means "changes into".

Let's imagine that we can zoom in to a tiny, tiny region of a solution containing acetic acid. The equation for the reversible reaction going on is, as before

​
At any instant we might be able to identify collisions that give rise to chemical reaction, pictorially represented here: 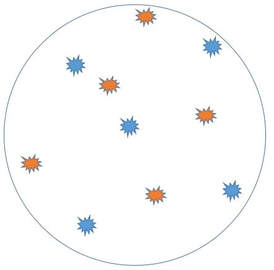 At any one instant, in many places in the reaction mixture, there are: There is no change of location of the species in a particular direction.
​
Reactants and products
​
Let’s consider, for example, the burning of methane in air, represented by the following equation:

This reaction is essentially “complete” : it is not a reversible reaction, and the reaction proceeds with formation of the carbon dioxide and water vapour until there is no more of either methane or oxygen left in the reaction vessel.

Such a reaction mixture might result from various starting situations, such as the following: In other words, we can form the reaction mixture by adding together (i) the species written on the left hand side of the chemical equation, or (ii) the species on the right hand side of the equation, or (iii) species that are written on both sides of the equation.

If a reversible reaction is at equilibrium, the concentrations of all species remain constant. But we cannot say that there is no reaction – there is reaction both ways. But there is no net reaction: no change in the amounts of species present.

If a reaction mixture is not at equilibrium, there will be reaction in one way faster than the other. The amount of any one species will increase as a result of one of the reactions, and decrease by the other. The change in amount of it over a given time period (increase or decrease) is the net reaction.

An over-simple analogy: If we put 100 marbles into a box with one hand, while we take out 75 with the other hand, there is a net change (increase) of 25 marbles.
​
If, in a given period of time, more of the “reaction to the right” happens than the “reaction to the left”, then there will have been a net increase of species written on the right of the equation.

Or, we represent the net reaction by an equation with a single arrow, such as ...

And here is how we might visualize what "net reaction to the right" means:
​ 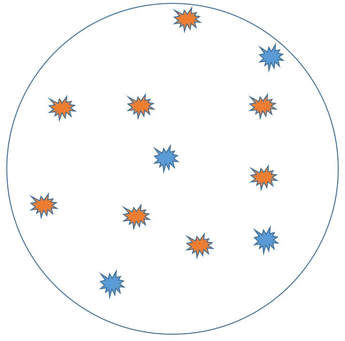 By analogy …
Imagine an all-day concert open from from 9 a.m. until 5 p.m. People can go whenever they like, for as long as they like. Here are some possible scenarios about the rates at which the number of people in the concert changes.
​
At 10 am:   Rate of arrival: 2000 people per hour
Rate of departure: 300 people per hour
Then we say that the net rate of change is an increase of 1700 people per hour.

This can be done by either (i) changing concentrations of one or more of the species, or (ii) changing the temperature.
​
After perturbation of the equilibrium, there will be net reaction in the direction that brings the reaction mixture again to a (usually different) condition of equilibrium.

​Firstly, it is important to be aware that the “reactants” and “products” are not in different compartments (and certainly not in two different vessels) – they are all dispersed uniformly throughout the one reaction mixture. The terms “left” and “right” refer to the positions of the formulas in the equation – and have nothing to do with the positions of the species in the reaction mixture.

This jargon concerns a reaction which was at equilibrium, and the equilibrium was “perturbed” (by change of concentrations or of temperature).
​
After the “perturbation”, there will be net reaction (because the reverse reactions are not happening at the same rate) in the direction such that the reaction mixture comes to equilibrium again.

Consider the reversible reaction represented by

After a perturbation of equilibrium, a “shift to the right” means that as the reaction comes to equilibrium again, there is net reaction in the direction that increases the concentrations of the species written on the right side of the equation (acetate ions and hydronium ions), and reduces the concentration of the species written on the left (acetic acid molecules).
​
Another way (my preferred way) is to say this is that there is an increase in the ratio

In everyday life, the term spontaneous refers to something which happens without prompting, immediately and rapidly. If you let go of a ball, it spontaneously falls to the ground.

When we are discussing reversible reactions and chemical equilibrium, the word has an entirely different meaning – unrelated to immediacy or rapidity.

In this context, the word spontaneous refers to a particular “direction” of net reaction.

And into that solution we add a highly concentrated aqueous sodium acetate solution. At that instant, the concentration of aquated acetate ions in solution would be greater than before (when at equilibrium), so the reaction would no longer be at equilibrium.

Then this net reaction “to the left” is the spontaneous direction of net reaction. Net reaction in the reverse direction would take the reaction mixture even further from equilibrium.
​
But now let’s imagine a vessel containing the gases hydrogen and oxygen. With respect to the reaction represented by

this mixture is not at equilibrium. This reaction has a very large equilibrium constant, and equilibrium would only be achieved if there were sufficient reaction that essentially none of either the hydrogen or oxygen remains unreacted.

But at ambient temperatures, the reaction is infinitely slow, so that reaction is never achieved (unless the mixture, or part of it, is heated).

Nevertheless, the direction of net reaction that would take this mixture to equilibrium is for net reaction to proceed to form water vapour.

Its infinite slowness does not change this categorization (unlike the meaning of spontaneous in an everyday sense).
​
If we were to use anthropomorphic language, which I often do (although many say we should not when talking about chemical reactions), we might say that reaction to form water is what this reaction mixture “wants” to do – regardless of whether it is able to, or not.

A simple analogy: If we have water in a dam on the side of a hill. The spontaneous direction of flow is downhill, even though it cannot do that.
A final reminder:

Directionality is implied in the equation that we use to talk about the reaction.

But chemical reactions do not have directionality of location.

For good understanding of the meaning of the jargon, visualize what the species in the reaction mixture are doing, rather than the chemical equation.