​Interaction of radiations and stuffs

​What is the nature of radiation?

Why are those particular wavelengths of radiation absobed?

Where does the energy of absorbed radiation go?
​ 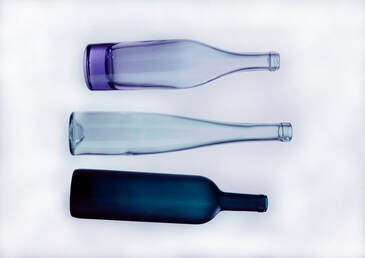 These bottles appear blue to us because red and yellow light have been absorbed by the glass from light coming from behind toward our eyes. Why were these particular colours absorbed, and blue and green transmitted? Where did the energy of the absorbed light go? What is light (or any form of radiation) anyway?

​Scientists can deduce evidence about the nature of matter by analysis of the particular wavelengths of electromagnetic radiation that are absorbed by materials.

Other evidence can be deduced from the particular wavelengths of radiation that are emitted by materials when subjected to high electric potential or heating - such as the colours emitted by substances in the flames in the banner image above.
​
This field of science is called spectroscopy.

These include, but go way beyond, radiation in the visible spectrum - those wavelengths which our eyes detect as coloured light from violet to red.

These, in turn, provide evidence about the structures of atoms and molecules.
​
Spectroscopic evidence derived from the interaction of matter with all wavelengths of radiation depend upon a phenomenon way out of our daily experience: that is, that the various forms of energy of matter are quantised. This means that energy cannot be changed continuously: it can only have certain levels (and not amounts of energy in between the "allowed" levels). What an extraordinary thing to contemplate!
​
Spectra (both emission and absorption) in the visible and ultraviolet regions of electromagnetic radiation are attributed to "transitions" between "allowed" levels of energy of electrons, while spectra in the infrared region are due to "transitions" between levels of energy of vibrations in molecules. Prof Bob gives a general explanation in Module 2201: Quantization of forms of energy.

What is light: waves, particles, or neither?

Some of the properties of radiations are consistent with them being waveforms.

However, the notion that species can absorb only particular wavelengths of radiation whose energies corresponds with the differences between levels of forms of energy is only sensible if the radiation is composed of particles (“photons”).

Light is what it is: and not a waveform and a particle, nor a waveform or a particle. Because or our inability to understand the mysterious nature of light, based on our common experiences of phenomena, scientists use a “dual nature of explanations”.

Join in a conversation with Prof Bob in Module 2202: Light: Wave-particle “duality”.
​
Using a view of light as photons, Prof Bob discusses a more detailed explanation pertaining specifically to absorption of radiations in the visible and ultraviolet in Module 2203: UV-visible spectroscopy.
​
What does the fraction of light of a particular wavelength that is absorbed (or transmitted) by a coloured solution depend on? The dependence is expressed quantitatively by Beer's law (sometimes called the Beer-Lambert law).

In Module 2204: Beer's law, Prof Bob demonstrates the basis of Beer's law through a simple activity, and shows how it can be used to analyse for the concentration of a coloured component in solution.
​