The artificially proscribed regions of the electromagnetic spectrum, and the names commonly used for them.
Source: NOAA (National Oceanic and Atmospheric Administration) https://www.esrl.noaa.gov/gmd/outreach/info_activities/pdfs/TBI_electromagnetic_radiation.pdf

​
Waves range from the long-wavelength (low-frequency) radio waves to the short-wavelength (high-frequency) gamma rays. An alternative conception of radiation is as particles, or “quanta”. The quanta corresponding with radio waves are low-energy particles, and those corresponding with gamma rays have high energy.
Spectroscopy in the visible and ultraviolet range of radiations

“White light” can be shown (by diffraction through a prism) to consist of all of the colours of the rainbow; that is, all of the wavelengths (or frequencies, or quantum energies) of radiation that we see as colours.
​ 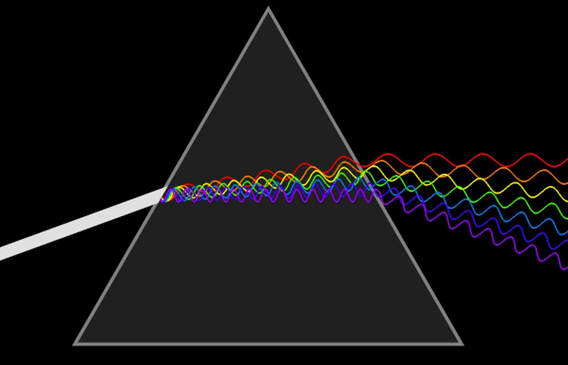 Image credit: https://www.weather.gov/jetstream/color
​By contrast, the radiation emitted by a sample consisting of hydrogen atoms (at high temperature, or subjected to a high electrode potential) has only particular wavelengths: there are no radiations emitted with wavelengths other than these.
​
The emission spectrum from other substances existing as atoms, and that have been “excited” by heat or electric potential, are similar to that of atomic hydrogen, although the particular wavelengths emitted are different. Hydrogen atoms have only one electron: all other atoms have more than one.
​

​On top is the continuous spectrum of “white light” emitted by the sun. Below are the line spectra emitted by “excited” (energised) sodium, hydrogen and calcium atoms, respectively. How can it be that radiations are emitted at particular wavelengths, but at none of the wavelengths in between?
Neils Bohr provided a level of explanation that involved an idea that is as extraordinary now as it was then: that the electron in each hydrogen atom can only have particular energies. This is called quantisation of the electron’s energy.

Bohr’s proposition, now commonly accepted was that emission spectra arise from the energy of the electron falling from one “allowed” energy level to a lower one. A quantum of radiation is emitted whose energy is that of the difference between the upper and lower “allowed levels.

This energy of the emitted quantum (which can be regarded as a waveform of particular frequency and wavelength) is one of the lines detected in the spectrum.

It happens that the differences between the energy levels of electrons are such that the energy of the emitted quanta correspond with the visible region (those which our eyes can detect) and more energetic (ultraviolet radiation).

Absorption spectra are the opposite of emission spectra. When “white light” is passed through atomic substances, radiations of only certain wavelengths are absorbed.
​
These absorption spectra are entirely consistent with the notion of quantisation of the energies of electrons: the electrons can only be “excited” from one “allowed” energy level to another “allowed” energy level. And the energy difference of the jumps corresponds exactly with the energies of the quanta absorbed to allow the jump to happen.

As well as the energy of the electrons, molecules have a form of energy that atoms cannot have: energy of vibrations. And the energy of each vibrational mode of a molecule (such as stretching, or bending) is quantised: that is, only certain energy levels are possible (we say “allowed”).

So the only energies that are absorbed from radiations passed through a molecular substance are those that correspond with the energy differences between levels. 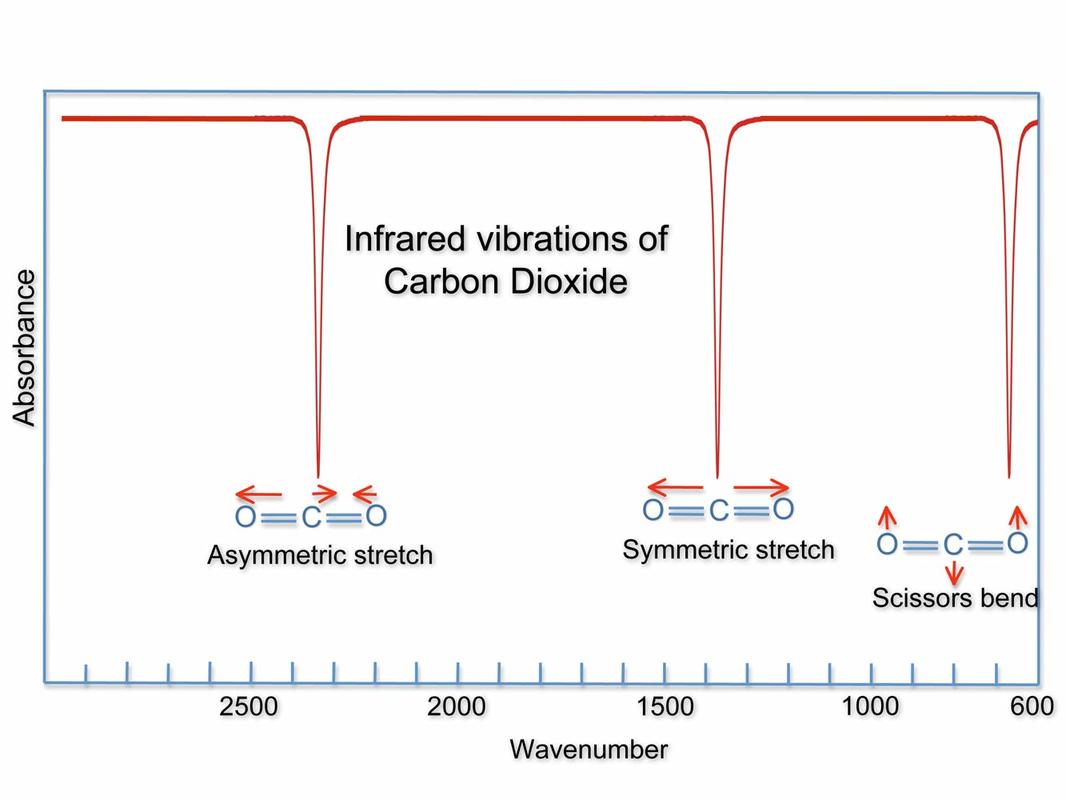 Absorption spectrum of carbon dioxide in the infrared range, with modes of quantised vibrational levels responsible for the various ranges of absorption. Wavenumber is a measure of wave frequency: the higher the number, the lower is the frequency.     Source: NOAA (National Oceanic and Atmospheric Administration)
We see bands of absorption, rather than lines, because there may be several modes of vibration (symmetric stretching, antisymmetic stretching, bending) and for each one, there may be excitations between “allowed” vibrational energy levels of different electronic energy levels.

Analysis of the absorption spectra of molecular compounds allows chemists to deduce much information about the structures of their molecules – particularly to allow immediate recognition of the presence of specific functional groups (such as the alcohol –OH group, the carboxylic acid –COOH group, or the aldehyde –CHO group).

The particular ranges of infrared radiation that carbon dioxide absorbs is the reason that it is an important “greenhouse gas” affecting global climate.

​
Spectroscopy in the microwave range
​
Molecular substances also absorb radiations in the long-wavelength (low frequency, low quantum energy) region of the spectrum known as the microwave region. This is attributed to quantization of the energy of rotation (tumbling action) of the molecules.

Microwave absorption spectra have been a valuable source information about the structure of molecules.
​
SELF CHECK
​