KEY IDEAS
​At a simple level of explanation, a solution that appears red to us absorbs, from the white light striking it, blue and green light - so that only “red wavelengths” are transmitted. Yellow solutions absorb blue light, and blue solutions absorb red/yellow/orange light from white light.

This leads, in turn, to the question of why a solution absorbs only particular wavelengths of light (or photons with particular energy).

The scientists’ explanation is quantization of the energy levels of each mode ….

All modes of energy of molecules, ions and atoms (electron energy, vibrational energy, rotational energy) are quantized: that is, the energy of each mode can have only particular levels – and cannot have energy intermediate between those levels.
​
“Excitation” of any energy mode (that is, increase of energy) can only happen as a result of absorption of photons whose energy corresponds exactly with the energy gap between any two energy levels. Otherwise, the energy would reach a level that is not “allowed”. 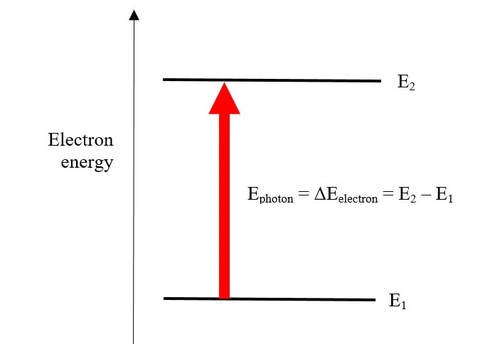 Consider any two “allowed” energy levels of an electron in a molecule. For “excitation” of the electron by absorption of a photon of radiation, the energy of the photon must exactly match the difference of energy between the two “allowed” levels – otherwise the electron would be “excited” to a level of energy that is not possible.
​The energy gaps between levels of energy of electrons in atoms, molecules or ions (and not the energy levels of vibration or rotation) are generally such that the photons absorbed are those of visible, or near-ultraviolet, radiations.
​
Of course different species have different “allowed” energy levels, and different energy gaps. So the photons absorbed are of different colours – and so the light transmitted (that is, not absorbed) is different for different species in solution. (See Module 2201: Spectroscopy: Quantization of energies).
​
Part 2: Coloured partial shadows

​If an opaque object is placed in the path of white light, a shadow is produced. This is total prevention of any of the white light from passing through.

We can physically form a partial shadow if the white light passes through a mesh. Some fraction of the white light is prevented from passing throught to a surface. But that which does pass through is also white light  - all of the wavelengths of visible light.

We can form coloured partial shadows by chemical means. For example, a blue solution put in the path of white light gives rise to a blue partial shadow because some components of the white light (red/orange light) are absorbed and do not pass through. 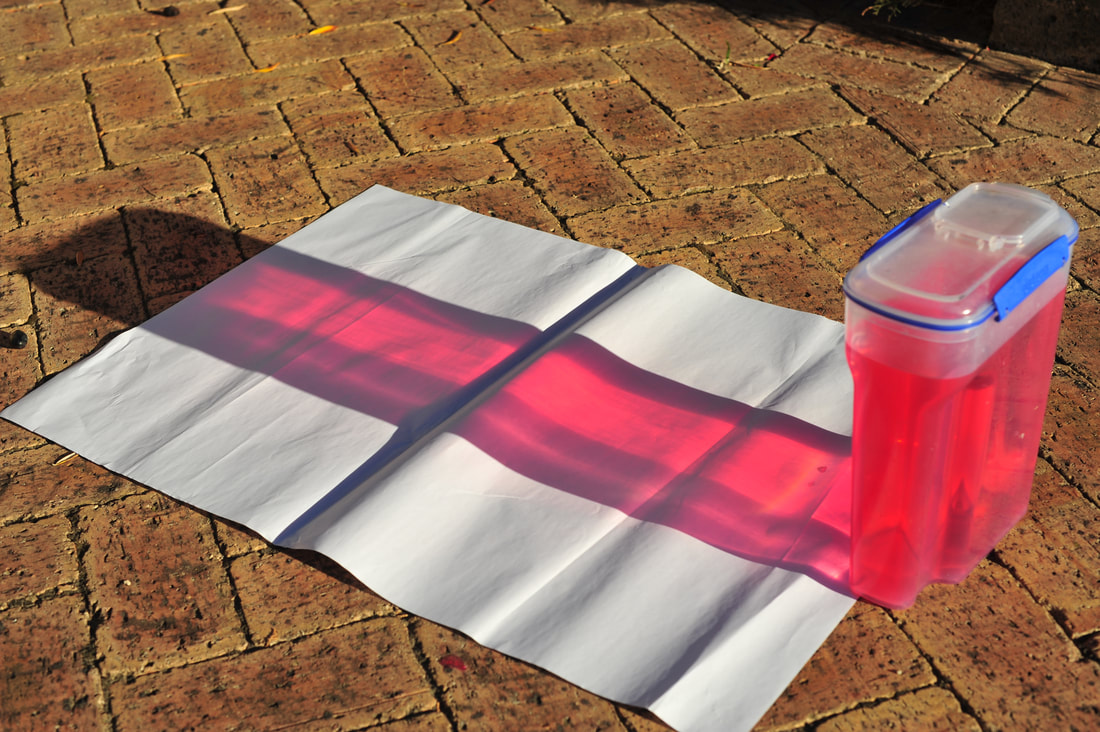 And a red partial shadow is formed as a result of ......... ?
A clarification
Red light (for example) can be the result of two different spectroscopic processes:
Terminology

An allowed energy level means an energy level that is possible (because that is the way things are, and not in the sense of being allowed by persons, or by the law).

Excitation refers to the increase of energy to a higher allowed level – in this case, of electrons, but the term is also applicable to vibrational and rotational energy levels.

I have used the term “red wavelengths” in quotation marks because wavelengths cannot be coloured. This is a shorthand way of referring to wavelengths of radiation which we perceive by eye as red colour.
SELF CHECK 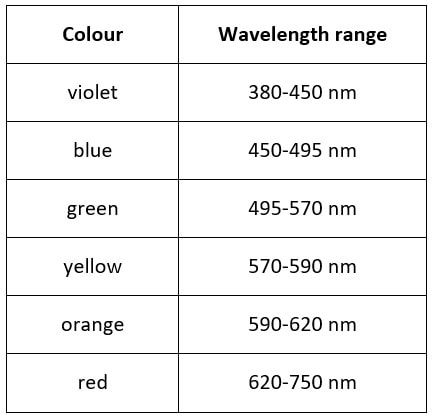 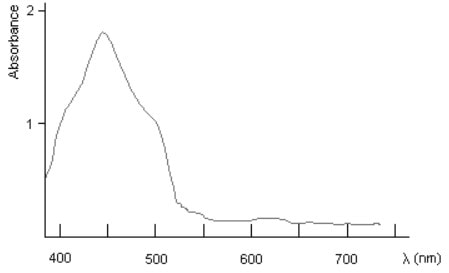