Beer’s law: How much light is transmitted?

What fraction of light is transmitted?

What does the fraction depend on?

North of the equator, or south?

KEY IDEAS - Beer’s law: How much light is transmitted?

The same species in the two solutions, at the same concentration, and the same path length travelled by the light before reaching our eyes. Perhaps not surprising that the colour intensity is the same?

Reflect on our general experiential knowledge
​

​Look through a coloured solution in a colourless container. It may appear red, for example, if species (such as molecules or ions) absorb “blue wavelengths” from the white light that enters the solution from the other side. Or it may appear blue or green because of absorption of “red wavelengths” and “yellow wavelengths”.

[And the light absorption can be attributed to “excitation” of electrons in the species to higher “allowed” energy levels - as discussed in Module 2201 Quantisation of forms of energy and Module 2203 Ultraviolet-visible spectroscopy.]

What happens if we dilute a coloured aqueous solution by adding water? Of course, the colour becomes fainter. (But, if you have watched the video, you will know that this depends on where you are looking from.)

We say that the colour has become less intense, or less deep.

This does not mean that the colour changes. No, the tint remains the same. The wavelengths being transmitted (and absorbed) do not change. It is just that a smaller fraction of the incoming light (at the same wavelengths) is absorbed.

​
Here is the key to sense-making of this module: The intensity of colour of a red solution depends upon how many of the blue-absorbing species’ molecules or ions interact with the incoming light before it comes to our eyes (or another sensor). The more molecules or ions that the light interacts with, the more blue light is absorbed, and the more intense is the red colour.

And the number of molecules with which passing light interacts is dependent on the concentration of the solution (symbol c), and how far the light travels through the solution before reaching our eyes (the path length, l)

Quantitatively, chemists’ use a measure of how much light of a given wavelength is absorbed by a solution called the absorbance, A, defined by

I prefer to think in terms of a reverse measure called transmittance, T, defined as

The extent to which the absorbance of a solution depends upon the concentration of absorbing species and the path length is given by Beer’s law (sometimes referred to as the Beer-Lambert law):

​where the value of ε (Greek epsilon) is a characteristic of the absorbing species. (At the same concentration of solution, and through the same path length, some species absorb more intensely than others.)

​The logarithmic nature of the absorbance relationship can be visualised as follows. Suppose that 20% of light of a particular “blue wavelength” is absorbed when it passes through a 1.0 cm path length of  a solution of given concentration. That is, 80% is transmitted, and I/Io = 0.20.

​As well as to follow this intuitive argument, you might want to apply Beer’s law to this situation.

An application to analysis of solution concentrations

The solution of unknown concentration had an absorbance of 0.78, measured in the same cell and at the same wavelength. What is the concentration of the absorbing species?
​
The data of concentration (horizontal axis) and absorbance (vertical axis) form a straight-line plot, shown here. 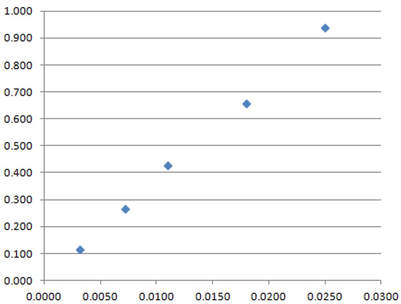 You can manually draw a line of best fit, or use a graphing program to calculate the formula for the line of best fit. By either means, interpolation of a value 0.78 for the absorbance leads to a decision that the concentration of the unknown solution is 0.021 mol L-1 (2.1 x 10-2 mol L-1).

In other words, the extinction coefficient, ε, in Beer’s law, is different at every wavelength.

And this is another way of referring to the spectrum in the visible light region of a substance (Module 2203 Ultraviolet-visible spectroscopy). 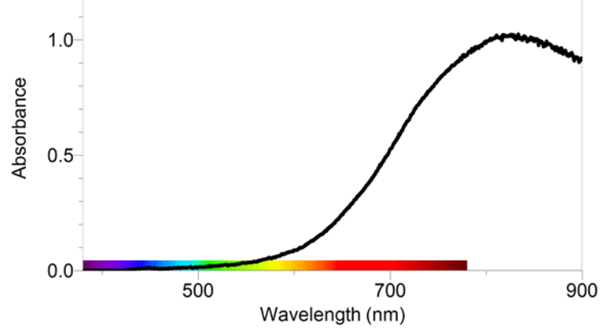 Absorption spectrum of a copper sulfate solution. There is only low absorbance (high transmittance) of blue light. The extinction coefficient for the coloured species, Cu2+(aq) ions, is much higher at 700 nm (red light) than at 600 nm (yellow-orange).
​Absorbance at wavelengths less than 500 nm (blue light) is negligible, so transmittance of incident light is almost 100%. A particular solution of copper sulfate absorbs a bigger percentage of incident light with wavelength 700 nm (red light) than it does at 600 nm (yellow-orange light). Conversely, the solution transmits a bigger fraction of light at 600 nm than of light at 700 nm.

In other words, the extinction coefficient used in a Beer's law application to copper sulfate solution is larger for light of wavelength 700 nm, than at 600 nm.

So, an absorption spectrum is essentially a plot of the extinction coefficient for that solute species over a range of wavelengths.

To date, there has been no reported difference.
​ 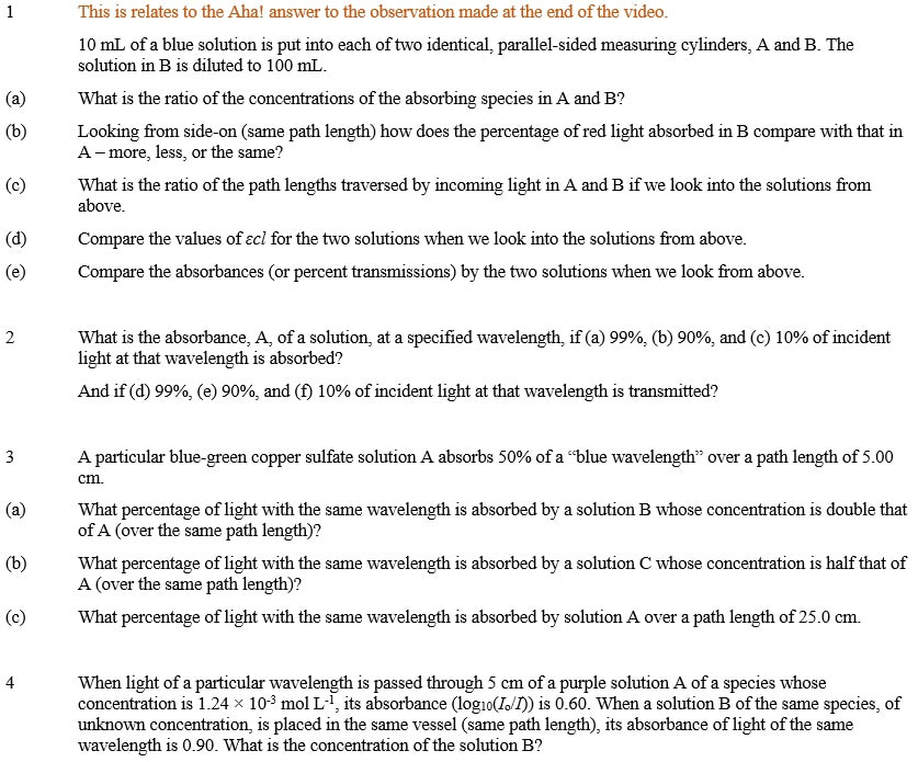 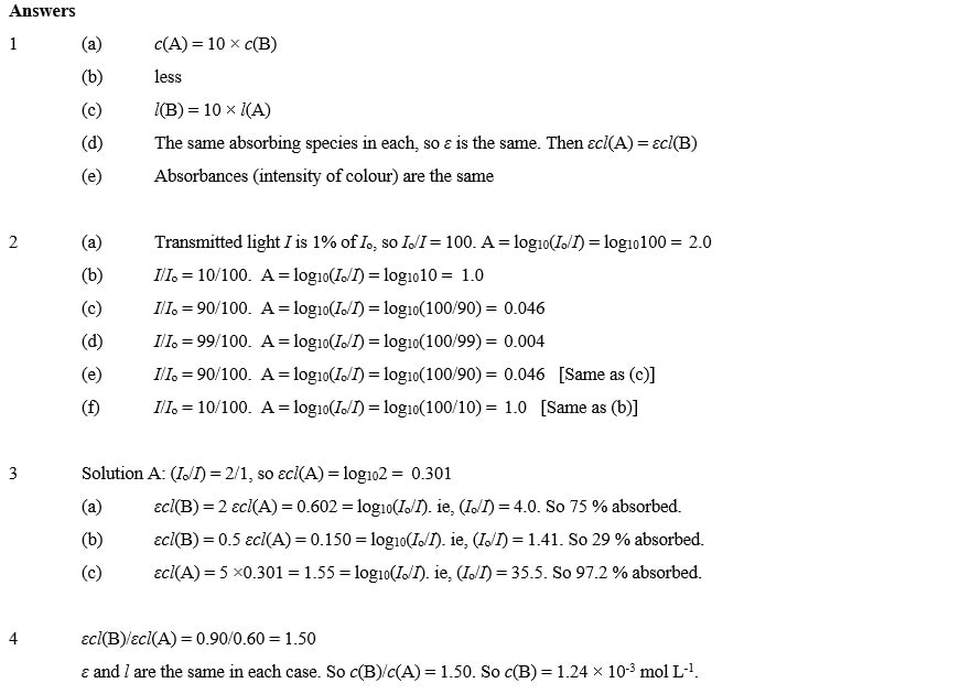 For a description of the activity discussed in the video, go to module T02 Beer's law: An activity.
​