What is the “greenhouse effect”?

How does carbon dioxide in the atmosphere disrupt Earth’s energy balance?

Carbon dioxide molecules gobbling up photons and spitting out other photons
​

In which direction do photons emitted from molecules go?

In a nutshell, by “capturing” some of the radiation emitted from Earth, carbon dioxide (and other greenhouse gases) affect Earth's energy balance (See Module 2701 Is Earth in energy balance?) so that the environment becomes warmer than it would be if there were no carbon dioxide.

It is called the “greenhouse effect” because the greenhouses (or glasshouses) used in agriculture also maintain a higher temperature.
​ 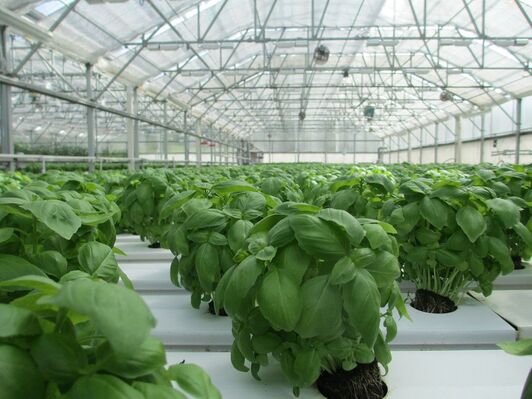 A greenhouse used in agriculture to maintain a warm environment. A greenhouse works by preventing warm air from escaping. This is different from the mechanism of operation of “greenhouse gases” in the atmosphere.
Before we go on to discuss how carbon dioxide causes a warmer environment ….
​
​
The nature of radiation
​
We can think about radiation as waves, or as particles called photons. This is often referred to as the “dual nature of light” (See Module 2202 Light: wave-particle “duality”).

I emphasise that surely there is no duality of identity of radiations: they are what they are. The duality resides in us, in our sensemaking. The nature of radiations are outside of our normal experiences, so for some purposes we resort to explaining phenomena by considering radiations as waves, and for other purposes we consider radiations as a stream of photons.

In relation to the mode of operation of greenhouse gases, it suits us to think of the radiation emitted from Earth’s surface as photons.
​

At last …. So how does carbon dioxide bring about a warmer environment?
​
In other words, what is the mechanism by which carbon dioxide acts as a greenhouse gas?

At every moment, many photons leave the surface of Earth, and move at the speed of light toward space.

Where does the energy go? The molecule vibrates faster. See Module 2706 Why do carbon dioxide molecules absorb radiations emitted from Earth?
But then ....

after a few milliseconds, the excited molecule “relaxes” - it returns to its previous low-energy condition. It does so by emitting a photon with the same energy as the one that it absorbed. [And the molecules of carbon dioxide are again available to capture other photons of outgoing radiation.]

The key to the greenhouse effect is that the photons from the “relaxing” carbon dioxide molecules are emitted in random directions - some of them back toward Earth.
​ 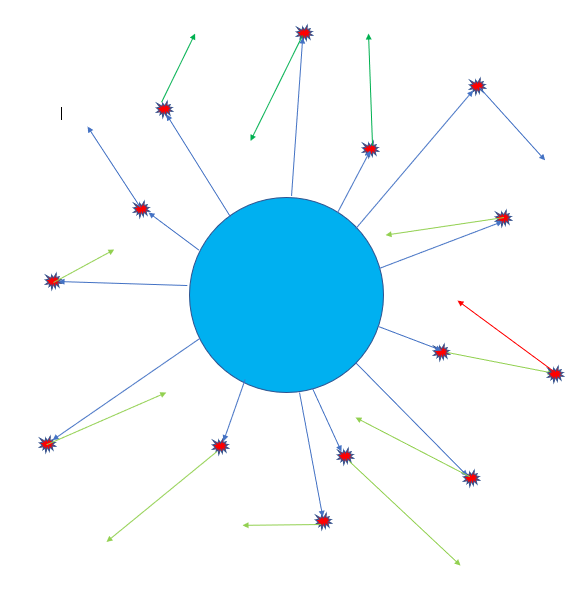 A simplified portrayal of the greenhouse effect. Blue lines represent the paths of photons emitted from Earth and captured by carbon atoms. Green lines portray the random-direction paths of the photons emitted when the “excited” carbon dioxide molecules “relax”. Sometimes these photons collide with, and “excite”, another carbon dioxide molecule. Then yet another photon will be emitted (red line).
So, some of the energy that was on its way to space returns to Earth. Less energy is emitted to space than if there were no carbon dioxide in the atmosphere.

Earth is warmer than it would otherwise be. This is the “greenhouse effect”.
​
​
A little less scientifically ....

Carbon dioxide molecules gobble up photons that are on a straight-line trajectory toward space, and then spit out other photons every which-way. Simple.

LEARNING CHEMISTRY WITH UNDERSTANDING
© The content on any page in this website (video, text, and self-check) may be used without charge for non-commercial educational purposes, provided that acknowledgement is given to the Aha! Learning Chemistry with Prof Bob website, with specification of the URL: ahachemistry.com.
Proudly powered by Weebly