Why are nitrogen and oxygen not greenhouse gases?

The majority of molecules in the atmosphere are nitrogen and oxygen molecules. Why do they not absorb radiation emitted from Earth?

Carbon dioxide is infrared-active. Why are not nitrogen and oxygen?
​

Why is carbon dioxide infrared-active?

I can describe to you why. But it is beyond me to explain why, in any sensible way.

The essence is related to the dipole moment of molecules of substances.


​
In principle ...
​
All molecules vibrate: They rapidly stretch and bend. [In fact, vibration of molecules is actually movement of the atoms of the molecule.]

During vibrations of the molecules of some substances, their dipole moment fluctuates: it changes rapidly, in sync with the vibrations. Such molecules can be “excited” by absorption of infrared radiation. They are said to be “infrared-active”.

The molecules of some other substances are such that their dipole moment does not change during the vibrations. These cannot be “excited” by absorption of infrared radiation. They are “infrared-inactive”.


Okay, that's the rule, but we need to make sense of it specifically in relation to molecules of nitrogen, oxygen, and carbon dioxide ......


​
Dipole moments of molecules in their "rest positions"
​
An important question, with huge implications for our daily lives is whether water molecules, for example, have a dipole moment - that is whether they are polar molecules.

We usually discuss this question by reference to drawings of water molecules in which the atoms appear to be stationary. In fact, the atoms are always jiggling about their positions - and that is what constitutes the vibrations of the molecule. In an accurate drawing, the apparently stationary atoms are in their average position over an extended period of time. 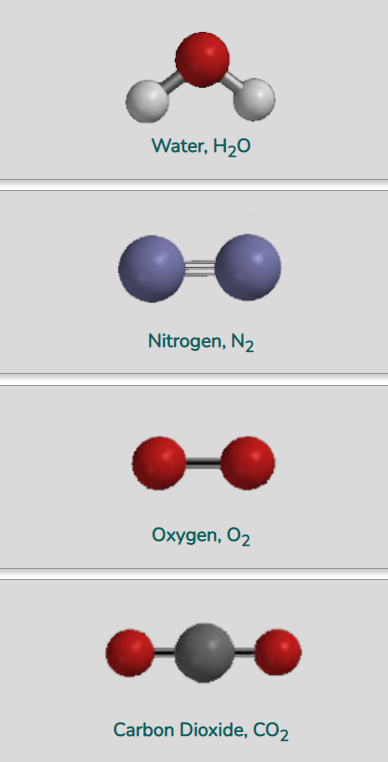 Portrayals of molecules of water, nitrogen, oxygen, and carbon dioxide, with their atoms in the average locations. Image courtesy of The King’s Centre for Visualization in Science at https://explainingclimatechange.com/lesson3/3_3_4.html)
We can deduce from the diagrams above that molecules of nitrogen, oxygen, and carbon dioxide do not have a dipole moment: that is, they are non-polar molecules. On the other hand, water molecules do have a dipole moment.
​
However, what is important with respect to whether a molecule is infrared-active or not, is not whether the "at rest" molecule has a dipole moment, but whether the dipole moment fluctuates during vibrations of the molecules. Two different things! 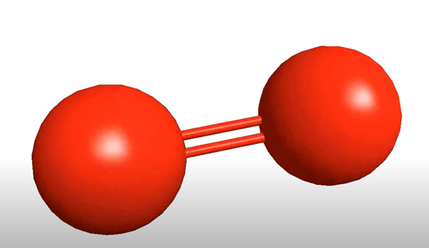 So, the dipole moment does not change during vibrations: it it always zero.

And so, oxygen molecules, as well as nitrogen molecules for the same reason, are not "infrared active". They do not absorb infrared radiation.

And so, they are not greenhouse gases.

​
​
And carbon dioxide molecules?
​
Molecules of carbon dioxide, with atoms in their average locations, are non-polar. So how can they be infrared-active? 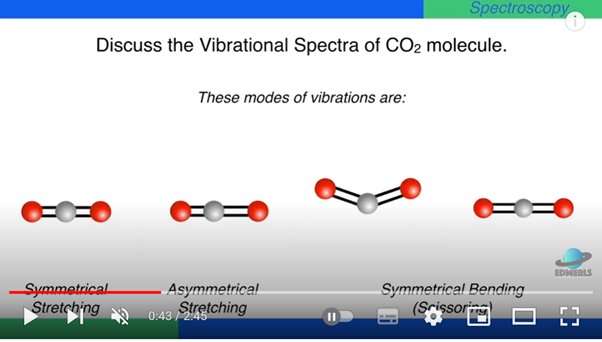 This can be seen in the infrared absorption spectrum of carbon dioxide ....
​ 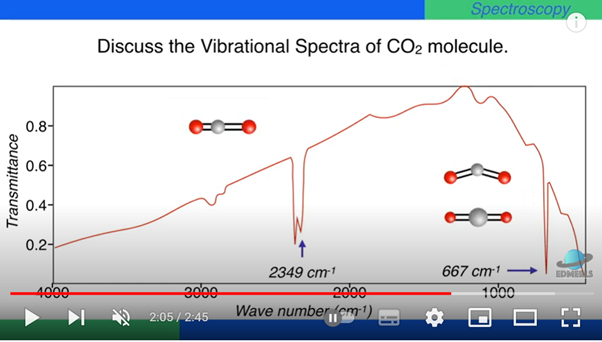 Two strong absorption peaks are due separately to (i) excitation of the asymmetric stretching mode, at 2349 wavenumbers, and (ii) excitation of both bending modes, at 667 wavenumbers. Wavenumber is a unit used by spectroscopists. The higher the wavenumber, the shorter the wavelength of radiation (and the larger the photon energy).
With acknowledgement of the excellent videoclip at https://www.youtube.com/watch?v=K6dSM_nDee8